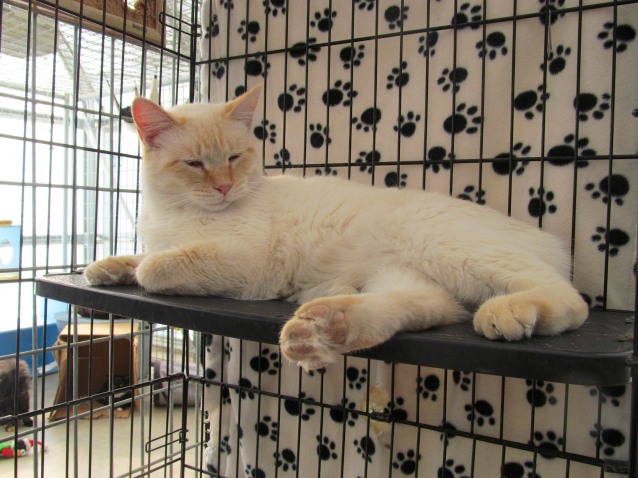 Today’s spokesmodel is Franklin, who I believe to be a purebred Red-point Siamese. He is a recent arrival at Stray Hearts Animal Shelter. He’s a mellow guy, and beautiful. As I’ve said before it is a great pleasure, a priceless honor, to be around cats all day long. Most of the job is cleaning, part of it is giving cats their meds when needed, and we get to play with the cats if we have enough time left. My favorite part is walk-throughs, where we accompany potential adopters and try to help them choose a cat. I’m good at this, and I think that this is, in part, because of my extensive bar tending experience, which gives me ease in talking to and communicating with people. But a large part of it is my ability as a storyteller. To me storytelling is something that reaches deeper into and connects more thoroughly than more direct conversation and chit chat. I’m sure I have more to say about this but my brain is cotton this morning and my coffee maker is about to bite the dust. A hot cup of coffee would be just the thing right now but that ain’t happenin’. Poor me. Alls I get is tepid.

This morning’s first visit to the outside world served me with a view that I missed a couple of days ago when the Leonid meteor shower was here. It was the second meteor but it was two or three days late, yet it was followed, several minutes later, by a slow moving satellite. That’ll do, I suppose. I’m feeling way run down these past few days. Little things are probably the best amusements when I feel like this. Yes, it’s a depressive down cycle, and I should be used to that by now, but you never get used to it. I feel shaky with anxiety, fuzzy, and visited by an unidentified menagerie of fears. This won’t keep me from work but I’d like it if it did. That’s a quality of depression, the desire to lay in bed until it goes away. I’ve never fallen that far, except when I was a kid, and back then I didn’t know that it was depression, I thought it was just life. Silly me. Of course there is another component to it. It’s been over a year since I lost a live-in relationship that I reckoned would last through the rest of my life, or hers. A big part of it was my own doing, but that doesn’t make it any easier to accept. I’ve been pretty much floundering since then. Working with animals has been good therapy. I wish it worked better than it does but, alas, it doesn’t. I get angry at this mental illness I must endure, then at other times, like these past two days, it’s just all fatigue, resignation, and the desire for an instant recovery. None of this will get me very far. I pine for some event today that will brighten my mood and lift me up. Even a little lift would do. The ever present romantic in me would like it to be romantic in nature, while the depressive in me says “of course it won’t”. I just hate it when those two quarrel.

Today is one of those days where I had no direction in mind for the blog post. Does it show? No matter.

Peace out, y’all. Goof gloriously, when you’re in the mood.