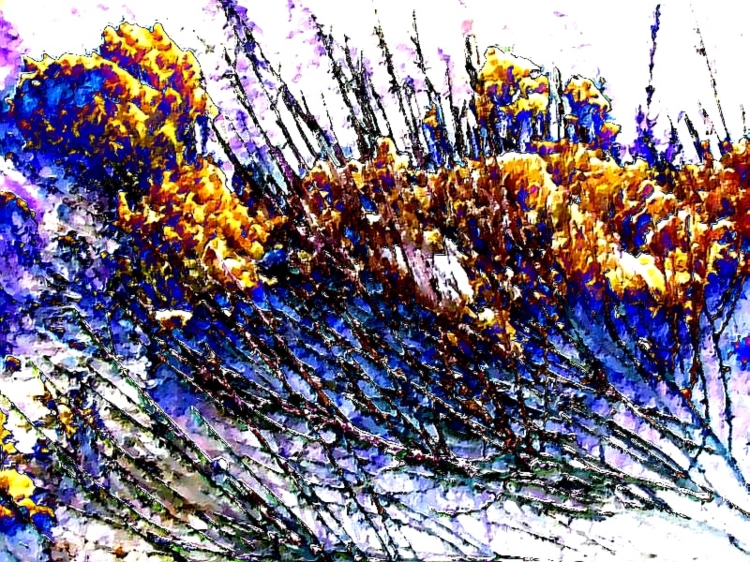 “Religion, mysticism and magic all spring from the same basic ‘feeling’ about the universe: a sudden feeling of meaning, which human beings sometimes ‘pick up’ accidentally, as your radio might pick up some unknown station. Poets feel that we are cut off from meaning by a thick, lead wall, and that sometimes for no reason we can understand the wall seems to vanish and we are suddenly overwhelmed with a sense of the infinite interestingness of things.”  ~  Colin Wilson

Coyote songs so rich and widespread that my smile was drawn from the dazzling stars and spread further along with the songs from the wild animals – that’s how my morning began. It brought me back down to Earth. There’s been a lot of that lately, and I am grateful. Yesterday’s missing blogpost went missing because I felt like crap. It was one of those times when true grit became clearly stupid when I became aware that I have been pushing so hard against the currents of life that I hadn’t even noticed that I was sick. Still am, but I am feeling better, thank you. Enter the Shadow. That was another part of it. Much sleep, plenty in fact, and the patterns of sleep went all wonky and stuff. I started out yesterday morning, promptly at midnight, awake and flushed with fear at where life will lead me from here. Anger as well. By 5 AM I was exhausted again so I lay back in the chair and intentionally re-entered the Dreamtime. When I awoke two hours later no memories of dreams were to be found. But don’t think for a minute that the dreams were inconsequential. That would be silly. I can’t articulate any further than to say that dreams never let us down. Nightmares have their place in our personal growth and development, whether we like it or not. I don’t know that I had nightmares. I rarely do. Anxiety dreams, dreams ripe with frustration – that’s more my style. Now, I hesitate to write about it here, lest peeps think I am daffy or deluded or stuff, but I have been experiencing contact, conscious contact, with some higher intelligence. It betrayed its hiddenness by inhabiting some rather bold patterns of coincidence and blatant timing. Most of this early contact was negative, Shadow stuff. But at one point the boldness of this intelligence made me snap. And I was like all WTF dude get yer self out and give me a gander at you dude. Show yourself. And things shifted. I soon remembered things like intentionality and (gulp) positive outlook, which means that I reckoned that a change of course was in order and to my great relief I realized that the positive thinking thing was merely a method for compensation from a drift elsewhere, otherwise, whatever. How Taoist can ya get, right? It’s all good? Nah. It is and it ain’t. Both-and. I love that term: both-and. Makes either-or look like all friggin stodgy and stuff. Moving forward, ummmm, so, oh dang it, I done ran out of stuff to say for now. Best get on to the next phase of the day. Boy howdy I don’t even want the sun to come up to find that the writer fella here ain’t stopped dreaming just because some of the dreams seemed bad. Poor little fella. I still physically feel like crap. Whatever. At least I acknowledge that fact, this fact, whatever. Yeh, whatever.